Back in February, the day after setting up my yearly events on TrainingPeaks, a notification simmered into view on the home page of my training calendar: “16 WEEKS TO EVENT,” the text yelled out at me, in bold font. Yikes. Only sixteen weeks until Dirty Kanza, an event I’d never done before, in a genre I’d never even tried, at a distance fully 60 miles longer than any bike ride I’d ever done? What had I gotten myself into? How would this go? Disaster, surely. I don’t think I actually believed that I’d even make it to the start line, let alone finish the darn thing or possibly end up with a better result than I could have hoped for. But here I am today, writing about an 11-hour, 50-minute finish and 22nd place overall - only four minutes and two spots back from my more seasoned teammate, James Walsh.

How did we get here? Well, not by riding as much as you may think! Although Kanza is daunting, it’s certainly within reach for anybody who wants to do it, and I think it’s possible for anyone to do well there, too, given solid preparation and some old fashioned luck. I certainly had the latter at Kanza, breezing through the 202 miles without a single mechanical mishap (thanks Viathon Bicycles and IRC Tire). So what did my form look like in the 16 weeks between February 1 and June 1?

You Don’t Need to Ride as Much as You Think

Looking back at my TrainingPeaks account over that time period, I averaged 11 hours, 23 minutes and 191 miles of riding each week. Nothing incredibly special! Early in the season I focused on getting in as many miles as possible, given a fairly normal, which is to say, super-busy small business owner’s life. I added in one sweet spot style workout once per week, and one higher intensity ride once per week. My focus, though, was on hitting at least 200 miles per week on the bike, so I wasn’t really structuring my training with any real rigidity: get on the bike and ride. Once or twice per week in the early season, you should be doing some traditional interval work, I would say, getting in a total of 60-80 minutes per week of higher intensities. When I say higher intensities, I’m talking about getting up above threshold power, but not by much — probably in the realm of 103-106% of Functional Threshold Power (FTP), and not true VO2 max-style intervals, which are probably about 10% higher. Over this period, I rode 11:15 per week, averaged 195 miles, and my time in zones looked like this: 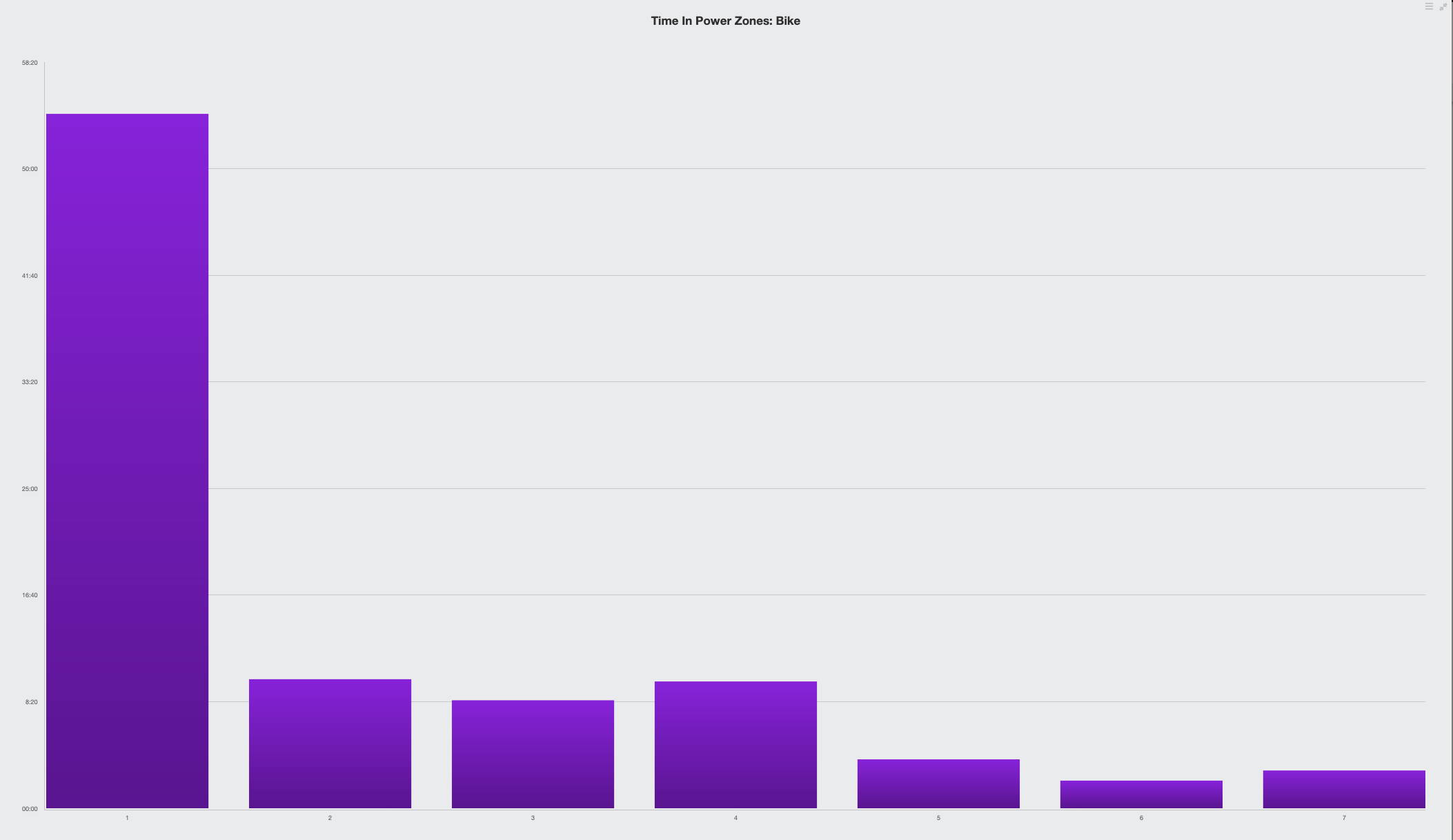 And below, here’s what a normal week looked like, in the middle of March. Note that I was swimming a fair bit, too. I don’t think you have to instantly add swimming to your regime, but the additional volume does somewhat diminish my “11 hours a week” claim. If I were you, I would add a few more hours of cycling each week, or simply add something like a few hours of solid walking. Yeah, you heard me right, good old-fashioned walking. If you have a family, this is an amazing way to both build your aerobic engine and some family capital, all at the same time. Walking is an underrated way to build endurance, as a 3-4 hour hike is usually going to deliver the same kind of aerobic stimulus as a commensurate “ride as you feel” kind of ride. It will also help with body composition, general health, and your basic level of happiness. Give it a shot.

Add in Some Racing, One Giant Day, and Many Four-Hour Rides

As March turned to April, the alarm bells started ringing: Dirty Kanza is only eight weeks away. I didn’t change my overall time riding too much, although my average ride time crept up to 12:34 per week and I added a block of races that culminated with the Belgian Waffle Ride, exactly four weeks out from Dirty Kanza.

The first race was a run-of-the mill gravel race of 67 miles, the second was a three-day gravel omnium in Bend that got me a total of 140 miles of riding over the weekend, and the last was Belgian Waffle Ride, which got me 7:45 total ride time and 141 miles (including the ride to and from the hotel before and after, the ride back to the hotel being noticeably worse.) That 7:45 day was my longest ride by far, poking holes in the belief that you have to do a ton of 180- to 200-mile rides to get ready for Kanza. Instead of lots of monster rides, I tried to get in A TON of four hour rides, so many that they became routine.

Here's what my time in zones looked like for this period. I was on my gravel bike, so no power data for this block: 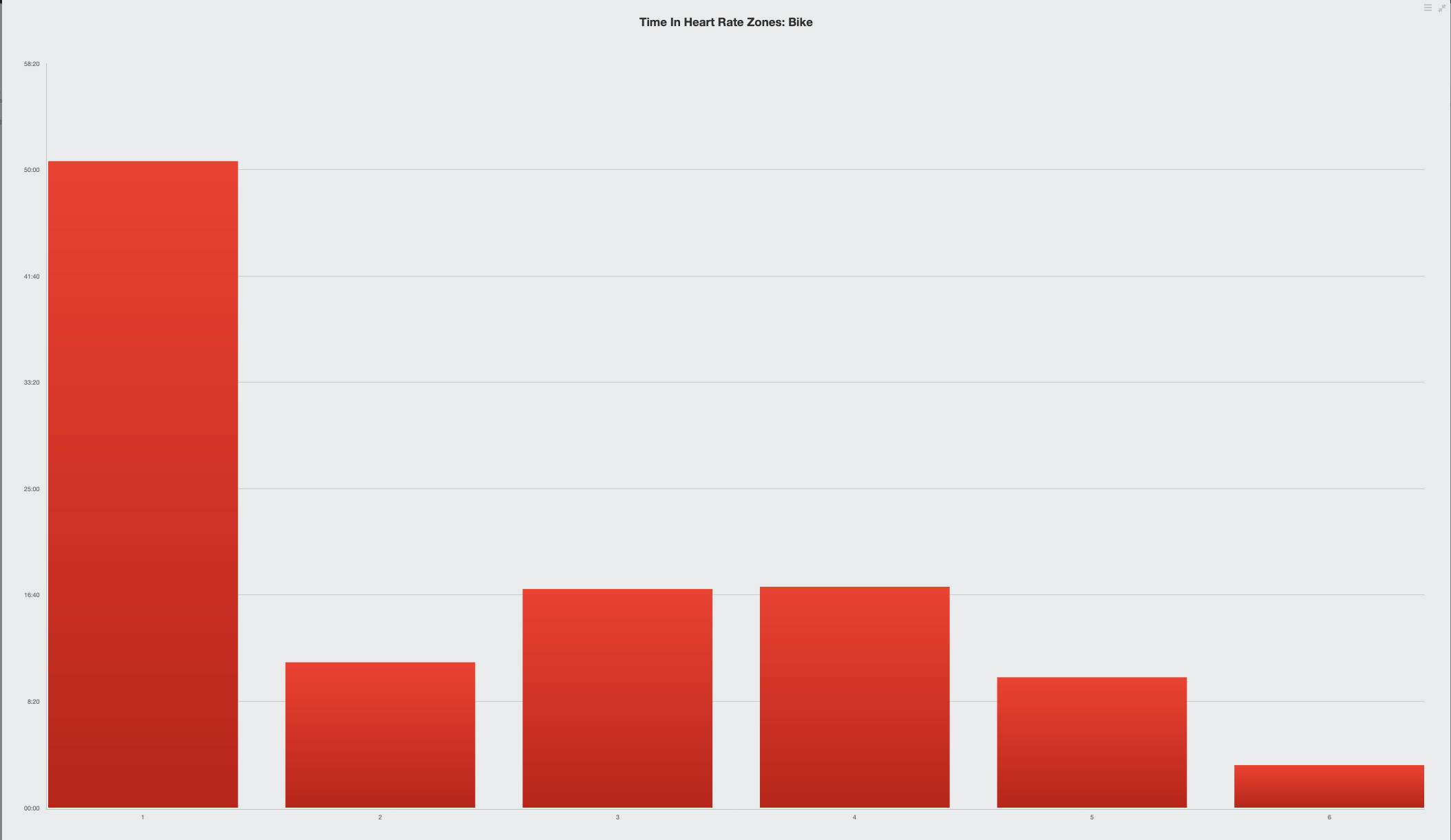 It’s fairly similar to the first block with maybe a touch more middle intensity (Zones 3-4) that you would see as a result of adding those races. I did a little more zone 5 work, too, as I really tried to build the aerobic engine ahead of a monster aerobic day (Kanza itself).

Here’s what my last big week looked like, two weeks out from the race:

Certainly more than 11 hours per week, but I also knew there would be a bulge in training hours as I approached Kanza. “Why the interval training?” I’m guessing people may ask. “It’s just a 200-mile slog — shouldn’t you focus on endurance?” That’s a good question, and deserves an attempt at explanation.

If you feed your system only endurance rides, you will improve your ability to ride for long periods of time, increase mitochondrial density (remember the “powerhouse of the cell” from 7th grade life science? Yeah, those), increase capillary density—all of the adaptations that will make you a better rider. You’re making your engine more efficient, but it’s not going to make you faster. If going faster is your goal, then you need to increase the size of the engine—your ability to absorb oxygen, both more of it and faster. How do you do that? By hitting that over-threshold/VO2 Max zone. You’ll see a workout in the week above that I completely stole from Dr. Stephen Seiler, who has popularized the idea of polarized training. It’s a classic 4x8 workout, where you ride as hard as you can for the allotted amount of interval. No particular target, just “as hard as possible for this duration.” Here’s what it looked like:

It’s nothing out of the ordinary and pretty classic. I did this workout (or a variation of it: 8x4, 6x6, 5x7, etc…) pretty much once a week for the eight weeks leading into Kanza.

Next time, I’ll cover executing in the race, physically and mentally. 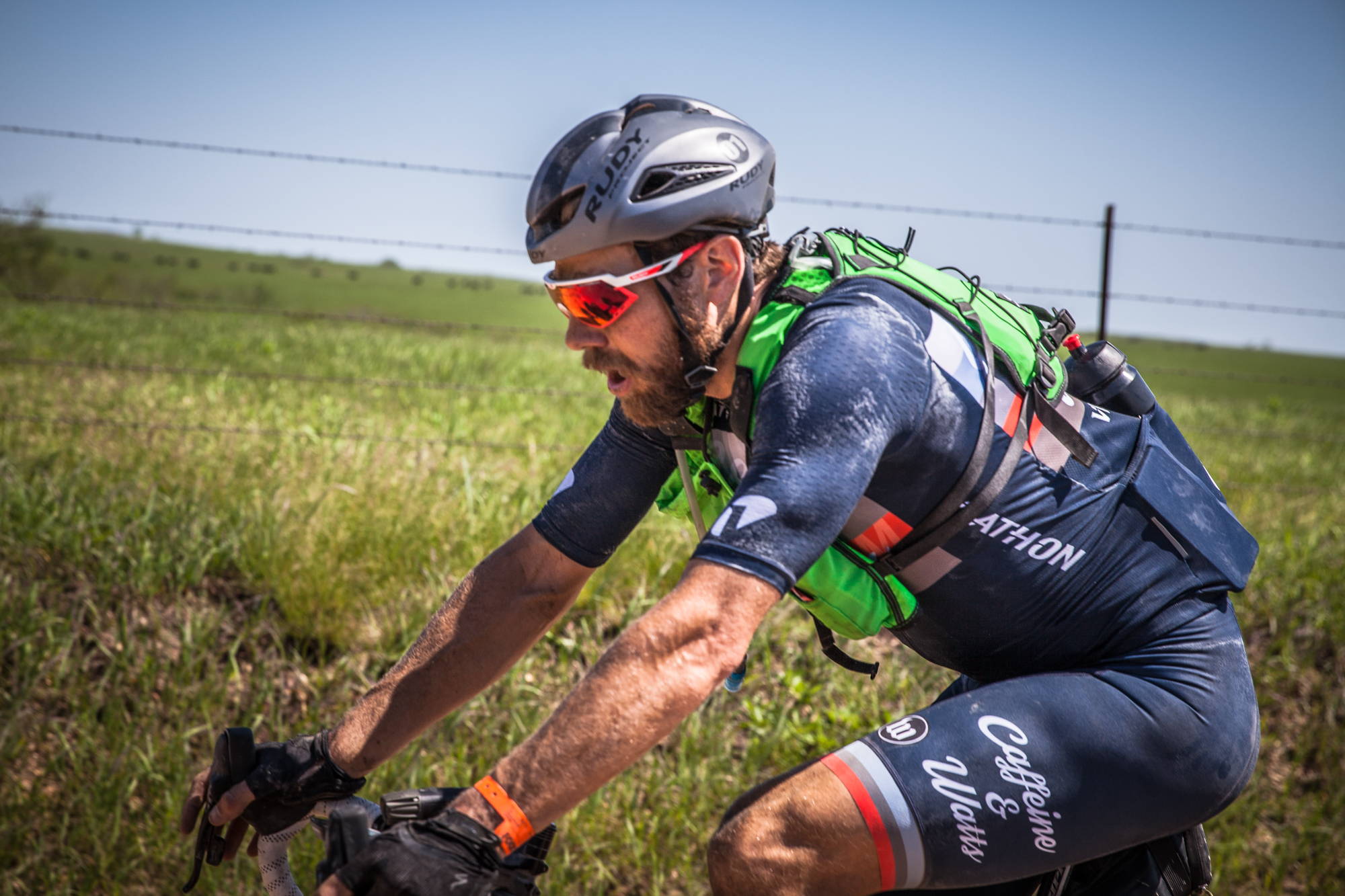